It’s Work for Hire, but what does that mean? And what does it have to do with the fact that I took a pen name just for this purpose? 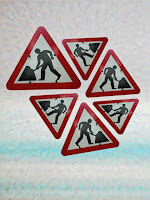 Yes, it's work, but not manual toil!

When BookEnds Literary Agency signed me on with agent Kim Lionetti, I was writing as Kaye George. Since BookEnds handled a lot of cozies and that’s what I wanted to write, and since I had never written one, Kim had to make sure I could write them. Some people do call my other series cozies, but they are actually traditional mysteries (except the Neanderthal series—that’s sort of traditional, but also historical—prehistorical).

What’s the difference? A traditional mystery contains a murder and can be set anywhere with any kind of sleuth. It can dwell on the gory details and show an autopsy. It can contain seedy characters, some of them with foul mouths and bad habits. A cozy, in contrast, is lighter and gentler. No gory details, no explicit sex, no cursing (or if there is any, it’s minimal), no harm ever done to children or animals. Especially animals. In fact, many cozies feature cats, dogs, and other pets. There may be some romantic interest, even some romantic tension, but the real stuff is behind closed doors, as we say. Many cozies have come to be based around a hobby or a career like baking, catering, sewing, libraries—respectable things like that.

Now, what about this WFH? Jessica Faust at BookEnds explained it better than I ever could, so I’ll put that link here.
http://bookendsliterary.com/index.php/2016/04/07/what-happens-when-the-publisher-owns-a-concept/

A quick summary of that, in case you don’t want to click over, is that the publisher came up with the concept and maybe some of the characters. They may have decided who will get killed or who the killer will be, or that may be left to the hired author. Sometimes auditions are taken, that is, submissions are turned in to them from agencies which have had a writer take on the task and do a proposal. (A proposal is usually a fleshed out synopsis of the plot, based on the original germ of the idea, plus the first three chapters.) When an author is chosen by the publisher, a contract is signed. This contract makes it clear that the publisher owns all the copyrights to this series. They own the concept, the characters, and even the author name (hence my other pen name of Janet Cantrell).

Why, you may ask, would a writer want to do this? There are a few good reasons. Cozies are extremely popular among mystery readers, so they sell well. (And the agencies and publishers know what their readers want.) My first two both achieved national best-seller status, I’m pleased to say. Also, if the publisher came up with the concept and accepted the proposal, that series will definitely get published. Thirdly, it’s a good way to get a foot in the door with that publisher and maybe later get a series with your own name.

One little hitch in my case. Due to multiple mergers and acquisitions, the publisher is looking at the bottom line and deciding to throw in with mostly huge megasellers, discontinuing many of their popular cozies. A lot of cozy writers can take their series to other publishers, and many are doing that, but I can’t, because I don’t own any of this one. Bad timing on my part. The market at this publisher fell apart right as I established my toehold.

The Fat Cat series may be continued, but only if sales of the third book, FAT CAT TAKES THE CAKE, which came out this month, are spectacular. I’m hoping, of course, but I’m also thinking of what else I can do, and I’m writing a proposal for my agent to send to other publishing houses. Wish me luck on both these fronts! 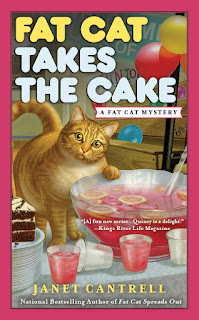 It’s a strange business! I wouldn’t trade it for the world.

http://janetcantrell.com/
Posted by Janet Cantrell at 1:00 AM 2 comments:

Giveaway last week, and this week…

I was so gratified at the signups for my giveaway last week. I think all the books have been mailed out, and as of today, all the correct books mailed out. 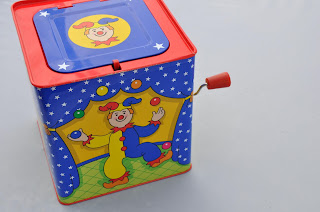 I’m also so happy to see reviews popping up! If you’re a reader of my blog, which means you’re a cozy mystery fan and probably follow other writers, you know how important reviews are to us. They help casual passersby decide whether or not to take a chance on our books.

This third novel in the Fat Cat series is my make-or-break novel. If it doesn’t do well, the series won’t continue. I would LOVE to continue writing this series, so would LOVE it if anyone who likes the books would post reviews. Amazon, Barnes & Noble, Goodreads, your own Facebook page—wherever they pop up, they help.

PS. There's an interview and a giveaway going on until the 25th at Linda Thorne's blog. 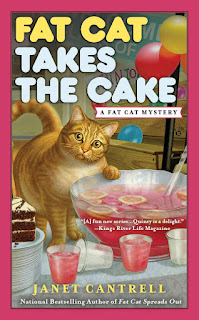 I'm giving away 5 books to celebrate the release of FAT CAT TAKES THE CAKE on Tuesday. One a day from now until the 6th. Leave a comment below or on Facebook and I'll pick one every night until midnight EST the 6th! 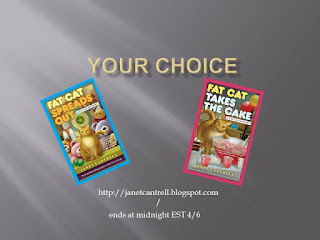