I'm nearly packed for Malice Domestic! Very excited to go, even though there's no nomination for me this year. I'm not even very nervous about my panel (The Paws that Refresh, Saturday, 3:00, if you're going, too). Maybe I've done enough of them by now.

Here's a story about my very first panel at a mystery conference. It was a short-lived conference in Plano, TX. It drew very good names, but only lasted a few years. I was attending as an unpublished mystery writer. I knew a few of the writers, though, some online and some in person.

There was a panel about to start and I was in the hallway outside the room. Cindy Daniel came up to me and said the panel was short a person and I had to fill in. I couldn't possibly do that! I'd never been on one! And I wasn't published. And the topic wasn't something I touched on in my books. She almost literally shoved me up the steps to the table and there I was--on a mystery panel.

As best I remember, the topic was prayer, or maybe religion, in mysteries. There was no overt prayer in the one I was writing. That one is published as EINE KLEINE MURDER now, by Barking Rain Press. But my character is a moral person. I might have said something like, she was brought up going to Sunday School and church, and prays, but it's not spelled out in the book. I must have said some other things about writing--or something.

When it was over, I was surprised that several people wanted to talk to me and said they liked what I had said. I think I might have been able to sell a book or two--if I 'd had any.

After that terrifying introduction to being on a mystery panel, there's never been another one as scary. Thanks, Cindy, for starting me out right.

No post next week, and maybe not the week after. But I WILL be back.

This will be my first time to attend Malice Domestic—as Janet Cantrell. I’m very excited to be attending with my Penguin series in full swing. By full swing I mean the first book is out, the second one is all wrapped up and the third is being edited.

I’ve been invited to appear on a panel called The “Paws” that Refresh with 3 other writers who include pets in their mysteries: John Clement, Carole Nelson Douglas, and Linda O. Johnston. We’re finalizing what we’ll be talking about right now. By that I mean we’ve started discussing it. If you’re going, you can catch us at 3 PM on Saturday, May 2nd. The Kentucky Derby starts right after that, so I’ll have to rush to the TV in the bar to catch the race. Last year we all cheered for Palace Malice, of course. There’s no choice that obvious this year, but I might cheer for Freshman Phenom. I’m not a freshman at Malice since I’ve been going for years as Kaye George, but I am a newbie as Janet. Does that count?

Discussions are ensuing here and there about wardrobe, always a concern the week before the conference. As a member of the Guppies, I’m bringing along a boa-type neck garment for the Sisters in Crime Breakfast. We started the tradition of wearing boas there a short time ago, but it seems entrenched already.

I’m also participating in Malice Go Round, which is like speed dating mystery authors two at a time. I hope I have enough bookmarks to hand out!
Posted by Janet Cantrell at 1:00 AM No comments:

A couple of nice things!

I was invited recently to a new blog AND a new Facebook group. They were both announced in my newsletter that went out yesterday, but I’d like to do another announcement here, that’s how excited I am about these!

The blog is KILLER CHARACTERS. This is a place where the characters in our novels get to speak outside the book! I’m slated for the 4th of every month. My first entry was by Quincy. I liked this one a lot because Quincy doesn’t ever get to speak in the FAT CAT books. In fact, the reader doesn’t even get to hear his thoughts. He’s just a cat, going about doing his cat-things in his cat-way.

My new Facebook group is called Nose for Trouble. Anyone interested in mysteries with pets can join to learn about the five authors on the group. I’m thrilled to be here with Krista Davis, Sparkle Abbey, Miranda James, and Linda O. Johnston. Krista just announced her newest cover today!

(If you would like to be added to my newsletter list, please send me an email at janetcantrell01@gmail.com and request it.)

Posted by Janet Cantrell at 8:24 AM No comments:

In anticipation of stirring up some interest at Malice Domestic, I just put together a file to take to the printer to get bookmarks made for FAT CAT SPREADS OUT. I haven't gotten there yet, though. In fact, I'm trying to decide something. Maybe you can help me.

There are two things I'd like to know.
(1) Does anyone ever use the QRC thing from a bookmark? I've used them in the past, but don't know if they're useful or not. 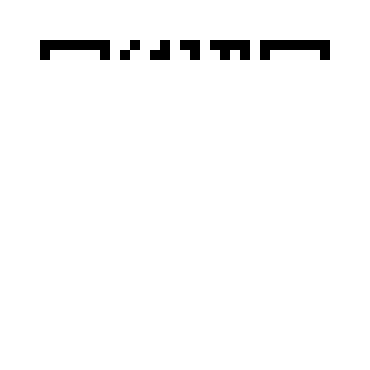 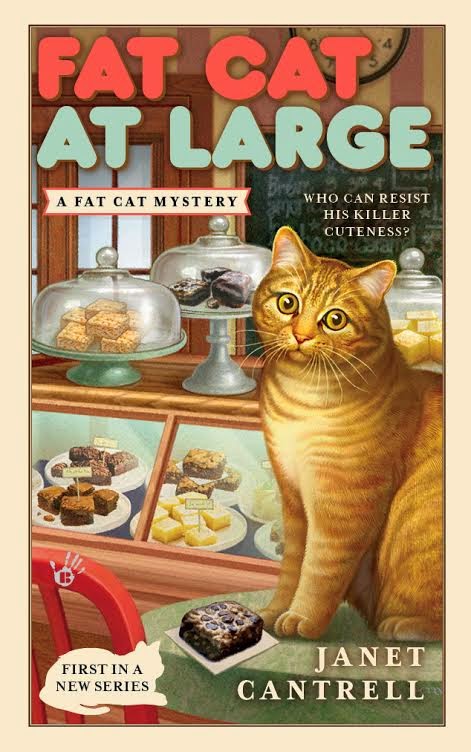 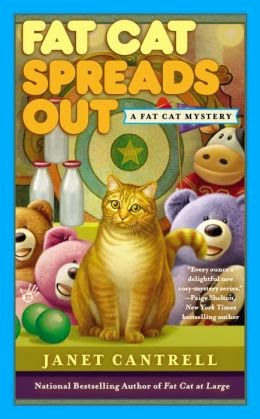 By the way, if you would ever like me to send you bookmarks, just shoot me an email and I'll send you some to distribute. (This is NOT an April Fools Joke!)

Posted by Janet Cantrell at 1:00 AM 5 comments: